— “Truffaut said that Hitchcock filmed lovemaking as if it was murder, and filmed murder as if it was lovemaking.” I have posted my third commentary about Alfred Hitchcock‘s brilliant film, Strangers on a Train. My first post discussed the opening sequence, comparing the shooting script to the film, and Truffaut’s vision of Hitchcock as [...] 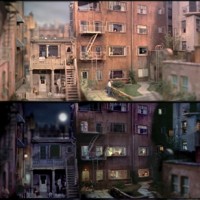 — Jeff Desom’s methodical assembly of all the shots of the courtyard in Alfred Hitchcock’s masterpiece is an extraordinary piece of storyboarding. You get to see all the different homes and stories that make up the courtyard, and to see the plot unfold. Desom actually used this footage to create a 20-minute 3-projector looping video [...] 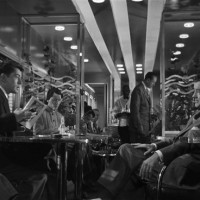 The strangers meet – I published the first of several posts on Alfred Hitchcock’s masterpiece, Strangers on a Train, on my blog on theasc.com. In my post I discuss the innovative 2-minute introduction of the characters, using only shots of their shoes. I also compare the shooting script to the film, to see if Hitch [...] 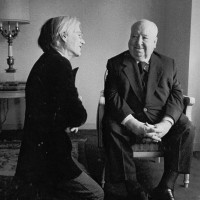 Warhol kneels before Hitchcock. 2 geniuses: 1 brilliant filmmaker, 1 terrible filmmaker. Warhol’s 1971 interview of Hitchcock is all about murder. The most interesting part is when the artist refers to having been shot in 1968: Andy Warhol: Well I was shot by a gun, and it just seems like a movie. I can’t see [...]